Sunday 24th July  2011.
The first time I saw Breydon water was many years ago as a child, it was an August bank holiday.  Mum and dad, armed with a shopping bag full of sandwiches and orange juice, took us kids to Great Yarmouth for the day.    The train steamed along the edge of Breydon water where wading birds foraged in the mud  and the green grey water ebbed out through the channel.  I looked out of the carriage window completely captivated by this mysterious stretch of water and vowed I would cross it one day.

More years than I care to remember have flown by since I made that promise to myself.  It is more than likely I would not have made the trip this summer had it not been for the fact that the wherry "Maud" was scheduled to cross Breydon,  it was a film opportunity too good to miss.

First priority was to find a boat and skipper.  I posted on the Norfolk Broads forum to see if anyone could help, within an hour I had three offers.   I accepted Lord Paul of Sealand's kind offer and for the following two weeks watched the long range forecasts for Great Yarmouth with more hope than expectation. 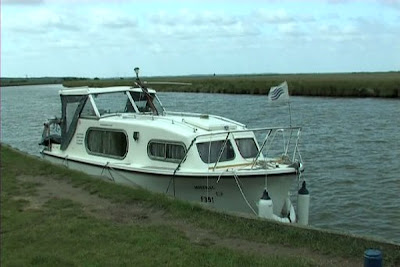 The day of the shoot arrived and I met up with Lord Paul and "Mistral" moored at the Fisherman's Inn, Burgh Castle.   We chatted over a cup of coffee while we waited for low tide and a call from the "Maud".  The call duly arrived and we set off  for the New Haven Bridge.   It took an hour to cross Breydon and fulfill at least one childhood ambition. 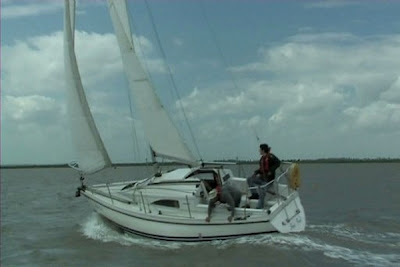 It was a perfect day for yachtsmen.

It was a perfect day for yachtsmen. a North Westerly was cutting across Breydon at 34 kph raising white caps and buffeting "Mistral" who rode serenely through water.
As we approached the New Haven Bridge we could see "Maud"s great black sail away in the distance, everything was falling into place.  We arrived at the bridge and waited for "Maud" to appear, then we got another call.  The wherry could not get under Vauxhall bridge, so they would have to wait for low water and try again the following day.

Lord Paul turned "Mistral" about and headed back to Burgh Castle,  We were both disappointed to say the least.  To make it worse as we returned across Breydon the sun broke through and the wind moderated - perfect conditions for filming.  Even though I had failed to get the shots I came for I enjoyed my day out with Paul on "Mistral" 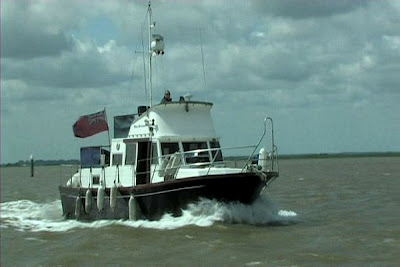 Plan B was quickly put together.  Lord Paul and "Mistral" were leaving Breydon on the morning tide so my only option was to shoot the wherry from the Breydon wall this was assuming they could get under Vauxhall bridge.

Next day  (Monday 25th  July) A North Westerly gusting to about 30 mph - very dull with fine drizzle at times.
Conditions for filming absolutely atrocious.
I parked at Church Farm, Burgh Castle, loaded my trolley with equipment and set off for the Breydon wall.
After a hike of about a mile and a half I found a spot which gave a good view in both directions, I set the camera up got out my folding chair and waited - and waited - and waited.    Then the call from "Maud" - they were still waiting at the Vauxhall bridge.   The tide was rising - the wind was strengthening - the light was getting dimmer by the minute and my spirits were fading with the light.     I pulled my collar up, turned my back to the wind and waited alone on the Breydon wall - for two hours - in a gale - I must be nuts!
Then another call from "Maud" they were under the bridge and on their way.  A few minutes later I could see her sail in the murky distance.     Very slowly "Maud" approached the headland where I was waiting.  A fine drizzle was blowing straight onto the lens,  the gusting wind rocked the camera making it impossible to take a steady shot on the 20x zoom.  "Maud" was well within range - if only there was a break in the cloud and a gap in the wind, I would have settled for just thirty seconds - but no such luck.   I knew it was going to be difficult to get anything at all in these conditions. 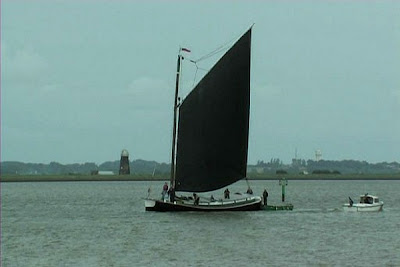 The wind did not relent, the light did not improve - but I did  get a few worthwhile shots.  Good enough to include in the film?  Probably not.    But "Maud" has to make the return trip across Breydon and I shall be waiting. 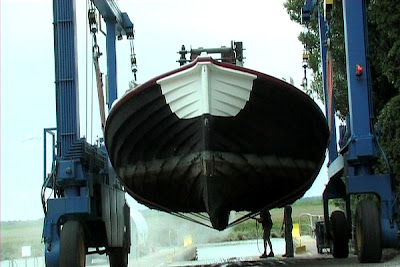 "Maud" hauled out for maintenance at Burgh Castle.


Many thanks to Lord Paul and the owners and crew of "Maud" for their help and support through a very tough weekend.       For my part it has to go down as an heroic failure.