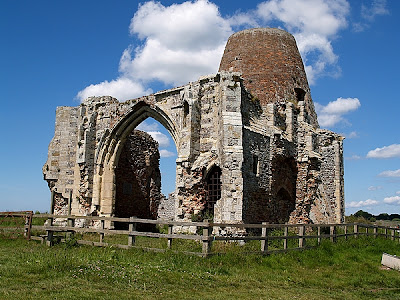 Any film that aspires to portray the history of the Norfolk and Suffolk waterways must include the legendary "Black Sailed Traders", the famous Norfolk wherries.
On Sunday August 1st 2010 my friend Steve took me out in his boat to shoot film of the "Albion" under sail.    We planned to follow the wherry from Womack to Ranworth where arrangements had been made for "Albion" to collect the Bishop of Norwich and take him to St Benets Abbey for the annual service.
I had intended to film the Bishop's arrival at the abbey twelve months earlier when he sailed on the "Hathor" but I was unable to cover the event.
We set off at about 08.30 in bright sunshine - a truly glorious summer's day.  There were already quite a number of boats on the Bure as we made our way to Womack water and the "Albion".

At Womack we spoke to Henry, one of the "Albion" skippers, to establish what was  allowed and what was forbidden while we accompanied the wherry under sail.  From a filming point of view there were a few issues  to be addressed.  Mounting the camera on a tripod was out of the question as the engine vibrations would be transmitted to the camera and produce camera shake.   Our strategy  was simple - hand held camera - wide angle lens - get in close. 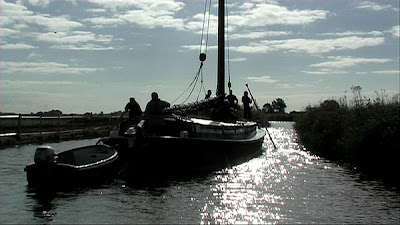 Following "Albion" out of Womack water clearly demonstrated some of the problems that would persist throughout the day.   Our first attempt to get alongside was blocked by fishing poles that seemed long enough to reach the opposite bank.   Steve, a keen angler himself, quite rightly respected the etiquette of the river and waited for a fisherman-free stretch of water.    Each time we found one there was usually a cruiser travelling toward us so all we could do was follow "Albion" until we reached the Thurne.  This in itself was not easy,  the little "Norman 20's" lowest comfortable speed was some-what quicker than "Albion's" rather sedate rate of progress.   While astern of us an ever growing flotilla of impatient cruisers and sailing dinghies swarmed, tacked and milled around us. 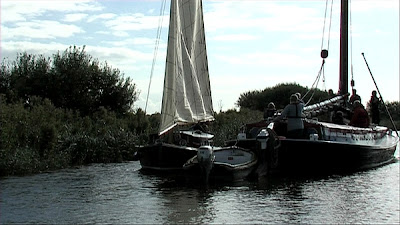 When we reached the Thurne it was like uncorking a bottle of champagne, craft of every shape and size hurried past us.  It  took an age until we were more or less on our own with "Albion"  and able to position our  boat and finally shoot some film.    It was no surprise that the first week in August  was going to be a busy period on the Broads but I had not expected anything like the volume of traffic we encountered.   Any clean shots of just "Albion" were few and far between, and to pass her sixty-five foot hull  kept  us on the wrong side of the river for longer than we would have liked, especially when there were  cruisers approaching us, at times three abreast.    Steve had to keep his wits about him all the time to avoid getting trapped between "Albion" and the bank while allowing dinghies to tack across our bow. 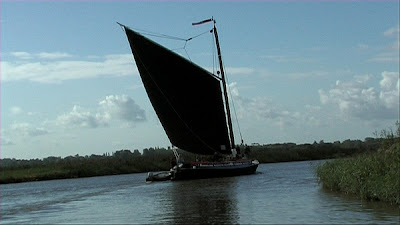 It was certainly an interesting shoot.  By far the best camera angle was over the starboard side which gave a good clear field of vision, but this meant we on the wrong side of the river for long periods.  Shooting over the port side was restricted by Steve at the wheel which meant the only angle was from amidships to astern.  The very worst angle was shooting over the bow of the Norman.  It required me to climb up and shoot over the cabin roof making sure not to get the bow rails in shot.  On more than one occasion a sudden change in direction or speed caused me to lose my balance which produced more than one heart stopping moment.   I was acutely aware that I had the security of a life jacket but the camera did not, that would have been one very expensive splash. 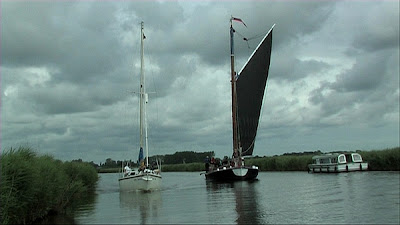 "Albion" cruised serenely on her way toward Ranworth with cruisers and dinghies dodging out of her path.  We shot "Albion" from every conceivable angle as we made our way along the Bure.  At around midday we moored alongside  "Albion" for  lunch and awaited the arrival of the Bishop.

After lunch "Albion" cast off, with the bishop on board,  raised sail and headed for St Benet's.   If we thought the river was busy during the morning we had a nasty surprise in the afternoon.  The Bure was like the M25 on a bad day.   The best we could do was to keep station astern  of the old "trader" and grab whatever shots became available.
The bishop took the helm of  "Albion" and led the flotilla of assorted craft toward St Benet's. 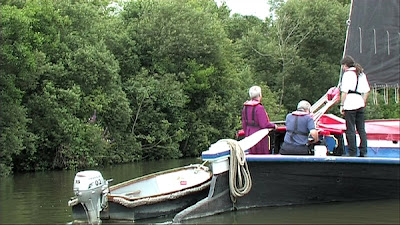 The closer we got to the abbey the more crowded the river became.   Every available mooring was taken and the abbey precinct was heaving with worshippers.   "Albion" was directed downstream to the old quay heading that was crumbling and devoid of mooring posts.   The BA launch waved us through with "Albion" and I got the best shots of the day. I had asked another friend  to shoot some film from the abbey precinct.   Some where amidst the melee of cameras, spectators and a brass band he was able to record the bishop coming ashore.   A storm had been threatening for most of the afternoon and the overcast sky grew darker and darker.   I am not a religious man but there was something surreal about the whole event,  St Benet's acquired an eerie atmosphere, almost biblical.    Should you ever  find yourself in the area of St Benet's on the first Sunday in August take the time to attend the service.   It is an experience you will never forget. 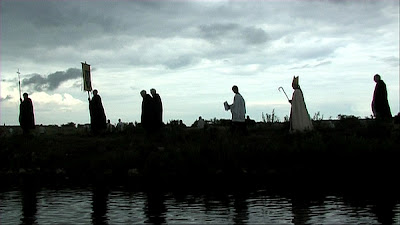 With "Albion" securely moored and the bishop safely ashore our days work was done.
Steve steered the Norman away from St Benets and headed for home as lightning flashed and thunder rumbled behind us.
Posted by Jonno at 13:04