7PM Monday 10th January 2011.
If it was not the coldest night of the winter then it had to be a pretty close second.   The road sparkled with frost as we left Norwich and made our way to Rumburgh in Suffolk.  We were on our way to film the "Old Glory" Molly Dancers and Musicians who were celebrating Plough Monday at "The Buck". 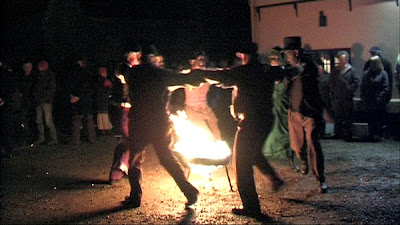 To produce a film covering the history of the Norfolk and Suffolk waterways it is necessary to look at a much broader canvas than just the rivers, broads and estuaries.  The waterborne trade relied heavily on an agricultural economy which embraced both arable and livestock farming.  To add some perspective to the film was the reasoning behind our visit to Rumburgh.  Not only did it add perspective it also added a fair helping of drama.

Plough Monday  is the first Monday after twelfth night.  Historically it was a time when gangs of plough boys would blacken their faces and haul a plough round the parish calling out  "A penny for the plough boys".   The men would blacken their faces so they should not be recognised by the landowners and farmers who employed them throughout the year.  Winter was a very harsh time of  year for the labouring classes, at a time when there was little or no work available a few extra coppers would help to put food on the table. 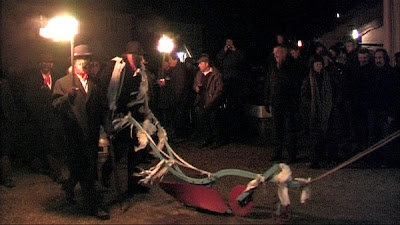 The "Old Glory" Molly Dancers and Musicians have researched and revived traditional dances that were once performed in and around the Eastern Counties, particularly in Suffolk.  The dancers are attired as labouring men right down to their hobnail boots.   There is an air of menace about them just like the plough boys of long ago, the flaming torches that illuminate the proccession, add to this atmosphere.  One hundred years ago any skinflint who did not part with a copper or two,  would awake next morning to be greeted by a single furrow drawn across their lawn . 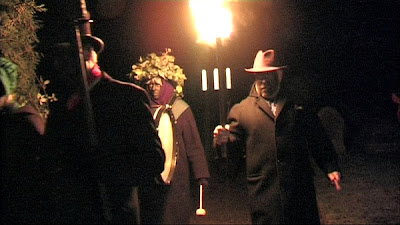 The Dancers assemble at the church of St Micheal and St Felix where the plough is blessed the day before (Plough Sunday).
The church bells were ringing out as the torch lit procession made its way through the churchyard.  Everyone dressed in black gave a distinct funereal feel to the proceedings.  The dancers are led by the "Broom man" who clears the way for the dancers.  Behind him the Lord of the dance and his Lady (traditionally the lady is always a man), they are followed by the "Box Man" (with the collection box) and the "Whiffler" (the Molly's sergeant at arms).   The column turns into Mill Road and heads toward "The Buck". The plough, hauled by two black faced Molly-men, grinds and rattles over the tarmac.  "Old Glory"  not only create wonderful theatre but it re-creates the past, bringing history to life. 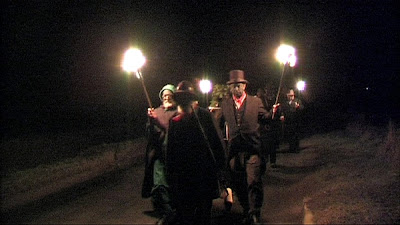 Up until the turn of twentieth century the Molly dancers accompanied the plough boys around the parish and performed dances for a small reward.  Whereas the Molly dancers are all men, the musicians are all women, they too have blackened faces and play a variety of instruments.  Their traditional music adds another dimension to the event. 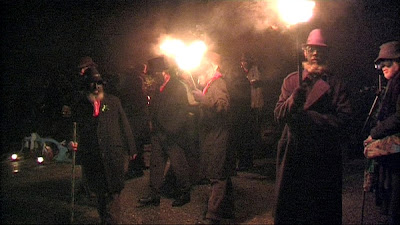 At the "Buck" a large crowd had gathered, and in spite of the "wind frost" the dancers stripped down to their shirt sleeves and performed their robust routines.   The sound of their hobnail boots crunching on the gravel of the car park in perfect time to the music has echoes of a bygone era.  They have been described as Morris dancers with menace. You can forget jingling bells and white handkerchiefs, these guys look as if they could use a pitchfork and handle draught horses if they were asked.
There is a great deal of history attached to the Molly dancers, dating back long before the reformation.  At that time the church encouraged the farm workers to collect money during this period, some of the money collected would pay for an eternal flame to be left burning in the parish church all year round.  The plough has symbolised man's dependence on the earth since pagan times and this has carried on to the present day.

If you have never seen them check their website and catch one of their performances - it is well worth the effort.  "Old Glory" only give about twelve performances each winter but they have a very large and   enthusiastic following.  "Snape Maltings", "Geldeston Locks" and "Rumburgh Buck" are possibly the most popular venues . 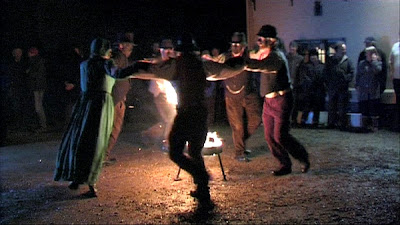 It was too dark to get a shot that would do justice to the the lady musicians at Rumburgh so I have included a shot from Bungay Christmas Fayre where we filmed a month earlier. 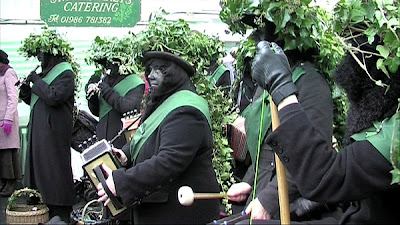