Rain was spilling from "Albion's" great black sail, cascading across the hatches and collecting on the plankways.  The helmsman steered the wherry through the squall while on the foredeck a group of volunteers clad in waterproofs of every colour seemed largely unconcerned by the weather.   For my part in the proceedings I had the camera safely cocooned in a "High Tech" bin bag and continued filming "Albion's" progress along the Bure. 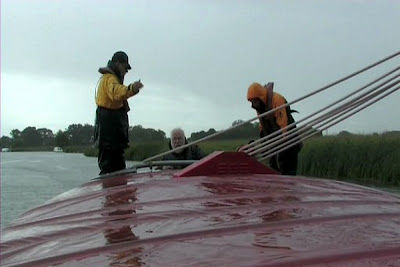 The "Volunteer's" charter was my fifth trip on "Albion" since I joined the trust a year ago.  It all began with a visit to "Albion's" yard at Ludham to have a look round.   In no time at all I had a mug of tea thrust into my hand and soon after agreed to work as a volunteer.   Being totally unskilled I was a kind of  "Odd Job".   Painting, rubbing down,  black leading the old wherry stove and checking life jackets.  All these tasks no matter how menial are all part of  "Albion's" preservation.


The best way to get sail on "Albion" is to sign up for crew training.  I thought I would give it a go and registered as a trainee mate.   Taking "Albion's" twenty six tons out on a charter is a serious business, safety  for passengers and crew is paramount.  This was constantly emphasised throughout my first training session.
The trainees were shown how to use the quant,  quanting is a very physical discipline which requires technique over brute force.  Personally I found it was somewhere between "very difficult" and "almost impossible".   If you didn't get the quant into the mud on the river bed it just floated up to the surface.     I wondered just how the old wherrymen could maintain this effort  for hours at a stretch  with a fully laden wherry and not even a breeze to assist them.

Raising and lowering  the mast is a drill that has to be carried out in strict order.  The ton of lead at the base  of the 42 foot mast is so finely balanced it takes surprisingly little effort to raise and lower the three tons of Pitch-Pine. That is, of course,  assuming all the necessary locks and pins have been removed .  It is claimed that working wherrymen could lower a mast and shoot a bridge without losing headway - it took we trainees slightly longer. 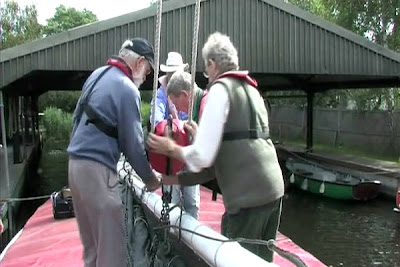 Next instruction was rigging and raising the sail.  I found raising the sail by far the most difficult of all the tasks, winding the winch saps the strength from your arms and drags the air from your lungs.
By the time I had learned about Gaff lines, Winches and Reefing points it was time for lunch.
After lunch we did a "man overboard" drill.  Recovering the dummy that had fallen overboard - it really was a dummy,  not one of the trainees.  For the recovery drill the wherry was brought to a standstill and anchored with mudweights while the tender was despatched to recover the "man overboard"
This is one skill the original wherrymen never had to learn - they neither had lifejackets or tenders with outboard engines.  The truth is many of them could not swim and drowned as a result - tragically some of the deaths were  wherrymen's children.

Progression from Trainee Mate - to  Mate - to Skipper takes as long as takes in true wherry fashion.  There is no hurry so it is best to enjoy the experience. 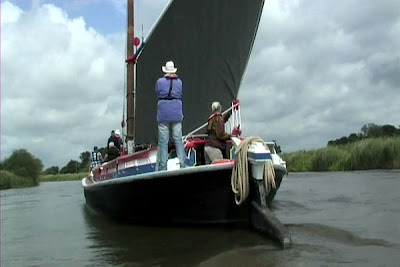 To sail on "Albion" is to experience living history,  an insight into a forgotten way of life.  It is hard to believe that some families actually lived within the confines of these vessels, cooking meals in the tiny cuddy, with some of their children sleeping in the foredeck.   A time when the waterways were major transport routes  and wherries were a common sight.

To see a short video of  "Albion" on the voluteers charter go to.
http://www.youtube.com/watch?v=R98jHU6ydos&feature=mfu_in_order&list=UL

or use youtube link in my favourite links  (opposite).