Coltishall to Buxton by Canoe

I guess the people who need to know are well aware that the navigation for larger craft on the river Bure ends at Coltishall - or to be precise - Horstead Mill.   Beyond this point flows a tranquil stretch of river largely undiscovered - The Aylsham navigation.  It was used by trading wherries until the great flood of 1912 when many of the bridges and locks were washed away.  In order to retrace the route of the old wherries all the way to Aylsham we needed to get a camera along these upper reaches of the Bure.  I reluctantly agreed that the most suitable craft for this task would be a canoe.    I have never made a secret of the fact  that I am not a natural sailor, nor have I spent a lot of time on the water.  Since I started making this film recording the history of  the Norfolk and Suffolk waterways I have found myself in a number of different craft.    But a canoe!  I must be partly Red Indian or completely mad. 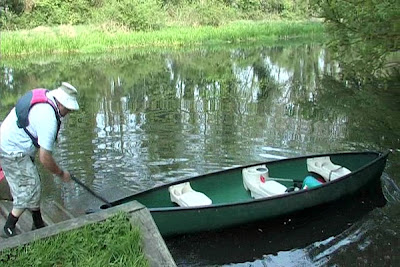 Initially the plan was to fix two canoes side by side to create a stable camera platform (and to make the old chap with the camera feel a lot safer) - the idea was like the "curates egg" - good in parts.   Unfortunately this meant we would have to get two canoes and the camera equipment in and out of the water to negotiate the  locks along the navigation.  My advisors (son Andrew and his mate) came up with a revised plan, all three of us would go in one canoe. Being the lightest, I would be in the middle to balance the canoe.  I pointed out this would mean I would be filming the back of someones head instead of the river.   So the plan was revised for the second time, I would go in the  front seat with the camera and equipment and the two heavyweights would sit amidships and astern.     Once the seating arrangements had been finally agreed the canoe was launched and I was nominated to load first.   The canoe looked very narrow, the river looked very wide and the water looked very wet.   The little craft rocked violently as I took my place in the front seat and stowed the camera equipment.   My knuckles turned white from gripping the sides of the canoe when both oarsmen took their turn to clamber aboard.   This was my first trip in a canoe and I promised myself, if I survived, it would be the last.
A few minutes later we had shoved off the Horstead slipway and were paddling towards Aylsham on the first leg of our assignment.   Deep down I knew I would eventually have to release my grip on the sides of the canoe and start shooting some film.

The first part of the navigation meanders through a canopy of trees that overhang the river - quite surreal - it is not difficult to imagine a heavily laden wherry nosing its way along this part of the river. 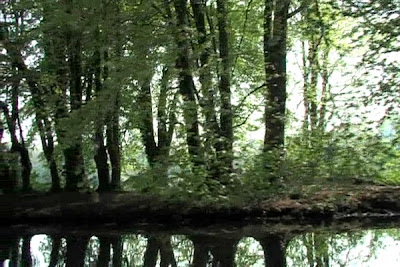 By the time we got to Coltishall bridge I was beginning to enjoy the trip.  I must have crossed Coltishall road bridge hundreds of times but this was the first time I had ever passed under it.  Bathed in sunlight the bridge looked a picture with its gentle arch mirrored in the water.  The bridge was rebuilt in 1913 after the great flood had washed away the original. 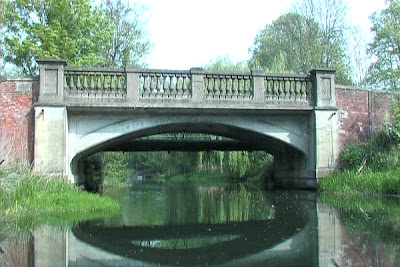 Paddle blades broke the surface of the river with a gentle splash.  The water rippled softly along the length of the canoe as we passed through Largate and on toward Mayton Bridge.    The lush green scenery glided past our little craft, a clear blue sky left its shimmering reflection in the river.  Perfect peace!  In no time at all I had become a committed fan of the canoe.  My fingers had returned to their normal pink colour and the camera was recording some mesmerising shots of the river. 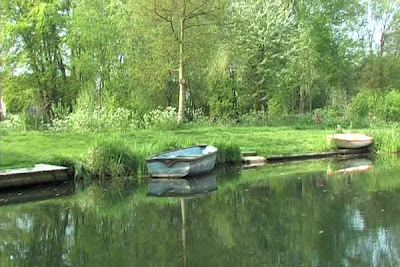 As straight as an arrow the "New Cut" stretched out ahead of us,  on either side the trees had given way to verdant green pastures.  In the open water of the "New Cut" a stiff breeze met us head on as we approached Mayton bridge. 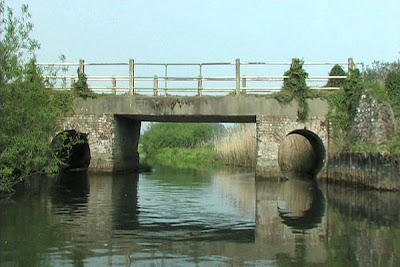 On the the far side of the bridge the breeze freshened to a fairly brisk "Northerly"  making the water quite choppy.   Our little canoe glided serenely over the ripples through "Buxton Long" reach and past the romantically named "Goose Turd Hill".  One can only imagine why the old wherrymen gave it this name. 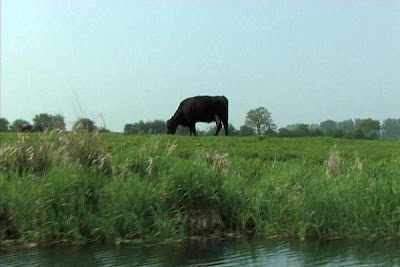 The  "Great Eastern" railway bridge lay ahead of us.  This three span girder bridge over the river Bure was built in in 1878 and carried trains on the "Bure Valley" line until it was closed to passenger traffic in 1952   freight trains continued to use the line until 1982.    Since 1990 the bridge has been used by the narrow gauge trains of the "Bure valley" railway running daily services between Coltishall and Aylsham throughout the summer. 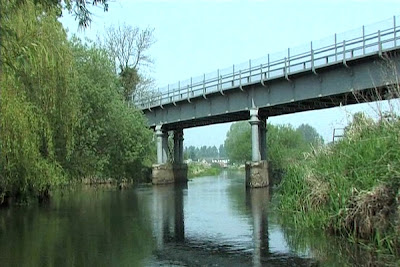 As soon as we had cleared the railway bridge Buxton mill was in sight.  The white painted building standing out against the trees that border the mill race.   The approach to the mill was very shallow, we tried to pick out the channel until a grating and crunching beneath us brought the canoe to a standstill.  I guess it was the combined weight of the three of us that eventually grounded our gallant little canoe.  Donning my rubber boots I abandoned ship and carried the camera and equipment to the bank while the two lads recovered the canoe. 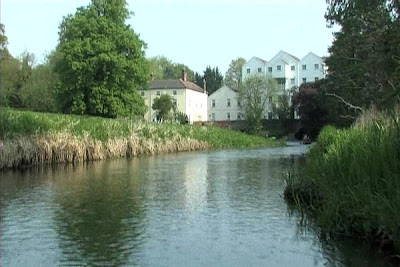 Part one complete I am really looking forward to part two.  Buxton to Aylsham - by canoe.
To see an edited video go to.