Reed Cutting On The Waveney.

Monday 14th February 2011.
A brisk Easterly wind sweeps across the Waveney marshes. The same Easterly that not so long ago powered merchant ships, ground  corn and drained  pastures.  Today the same Easterly with no real work to do mischievously scurries through the reed beds.  The reeds turn away and bend  their heads to mark its passing as it hurries down stream whipping the water into sunlit liquid crystal.
There is an excessively low tide this morning, the reed cutter's boat lies almost six feet below the landing stage.  I am not a natural sailor or as nimble as I used to be.  I peer over the edge of the timbers and lower the camera and equipment into the hands of the men already in the boat.  Then trusting in God and providence I make my leap of  faith into the dinghy  - a few minutes later we are rowing toward the reed beds on the far side of the Waveney. 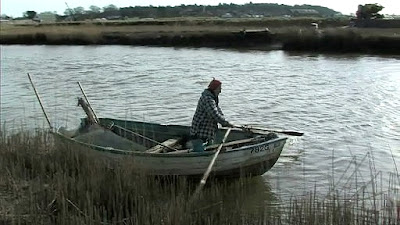 A small number of  people still harvest reed, but to make it viable  and compete with imports from Eastern  Europe, the reed is cut mostly by machine.
Today I am filming one of the last marshmen to harvest reed by hand in the traditional way.  I feel compelled to record the process before it disappears forever - as it surely will.
The marsh is waterlogged, every footstep fills with water as I follow the reed cutter and his son across the reed bed.  The wind coming off the sea is cold and biting,  there is no welcome on the banks of the Waveney this morning. 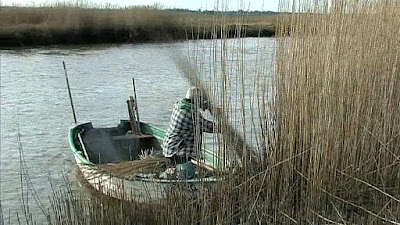 Historically Reed-cutting provided an income in winter when no other work was available.  Farm labourers, marshmen and fishermen would seek employment on the reed beds.  The season was short but intensive, beginning around December after the first frost of winter and ending in March when the new reed colts appeared.  In shallow, slow moving rivers men would stand up to their thighs in the freezing cold water cutting reed at the water's edge.  Or they would scythe their way across the ronds in majestic sweeping actions, the spiteful Easterly wind a constant companion.  Reed would be bundled into shooks and loaded onto reed lighters then taken downstream to staithes, from there Wherries would carry them away.   As I film the process it seems very little has changed.


One hundred and fifty years ago reed cutters would have been a common sight on the river banks except there were few people to see them, apart from maybe an eel catcher or a passing wherry.   Leisure craft were the preserve of the wealthy and only took to the water in summer long after the reed harvest was over.
A roof thatched with Norfolk reed is warm in winter and cool in summer and it can last up to seventy years.   Reed  is graded by annual growth.  Single wale is a single years growth which produces the best quality Reed.    Double wale is growth that has been left for two years.
The reed is cut close to the ground with extremely sharp hooks,  then the cutter gathers enough reed for a bundle, roughly a circumference of  about twenty-four inches.  Equivalent to three hand spans.  The bundle is raked clean and loosely tied with twine. 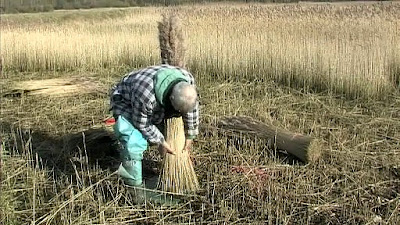 When every bundle is free of debris  it is dropped onto a "knocking" board forcing  the twine to tighten around the reed butts .  What appears to be a simple method is a very skilled process learned over many years.  Unless each bundle is a uniform size and density  the quality of the thatch will suffer.


By mid afternoon we had finished filming and the dinghy carried me back across the Waveney toward the stacks of reed safely stock-piled on the river wall.  The oars creaked in the rowlocks as the dinghy returned me to the 21st century.

To see the Reed cutters working on the Waveney in April at the end of the harvest go to.
http://www.youtube.com/watch?v=OBfYX_mxNtc