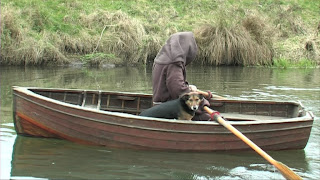 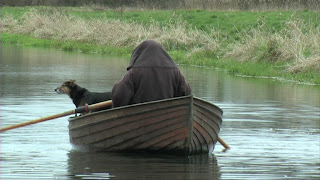 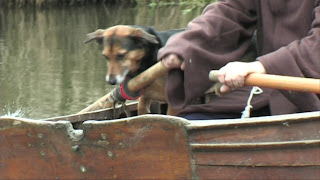 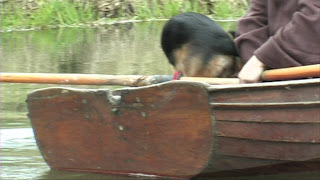 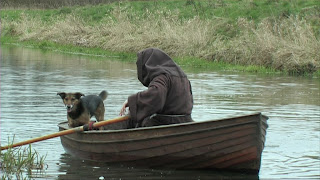 "Cut!"
The boat had to be quanted back to the slipway for repairs and more baling out.
For the third time the monk set off with the ever patient, but by now,  very wet  Miss Leigh in the stern.
This time the boat made two perfect passes while miss Leigh behaved exquisitely for the camera.
"Cut!"
I had my fifteen seconds of film thanks to a very determined group of people.
Posted by Jonno at 06:51 3 comments:

At sixty eight years old I guess the average person doesn't get too many new beginnings.      For me, my sixty eighth year has given me my independence and the chance to do the two things I love best.  Make films and explore my beloved Norfolk.

For the last two years I have been working on a labour of love.  Recording the history of the Norfolk and Suffolk waterways on video and capturing a forgotten way of  life that once sustained the men and women of these counties.
Eel catchers - Wherries - Wind mills -  Reedcutters - Wildfowlers  and  Norfolk Thatchers can still be found,   but they are becoming  very  rare .

This labour of love has been work in progress for the last two years and is likely to take at least another twelve months before it is completed.   I would like to share this video adventure with you through the wonderful world wide web.    Amuse you with the lengths I have (and am ) prepared to go to in order to capture the sequences I believe are necessary.  Share the frustration of  the shots that got away.  Show my appreciation for the folks who have gone out of their way to help me.

Photographs and video clips will be included in future blogs. 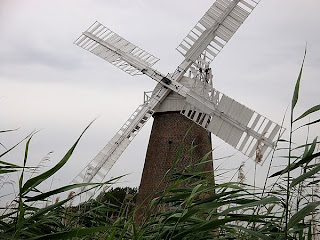