"Hathor" On The Slipway.


Four years ago along with a large group of people I watched the pleasure wherry “Hathor” cast off from the quay at Wroxham and move slowly downstream until she was out of sight.  It was September 2009, “Hathor” had just completed her “Farewell Tour” during the summer and she was returning to base to await overhaul and renovation.

The intervening years have not been kind to “Hathor”.  She endured a full winter out in the open in 2010 while essential modifications were being made to the base to accommodate her.   Ironically it was the severest of winters for many years.  Three months of sub~zero temperatures and damaging frost took their toll on the pleasure wherry’s varnished timbers.

Now four years on “Hathor” is safely on the slipway at the WYCCT and her restoration is under way.  Her last major overhaul was in 1986 when she was acquired by Peter Bower and Barney Matthews from Martham Boat-builders. It took them two years, and a considerable sum of money, to repair the damage caused during the decade she was used as a  de-masted “live aboard”.  “Hathor’s” luxurious interior suffered grievously during this period.
“Hathor” was originally commissioned by the misses' Helen and Ethel Colman and  built by Daniel Hall of Reedham in 1905 for a cost of £575.00.  John Hurn was paid a further £1400 for the interior woodwork.   “Hathor's” luxurious, no expense spared, interior brought the grand total to £2039. 5s. 4d.  An astronomical sum of money in 1905.
For almost fifty years “Hathor” served the Colman and Boardman families with an unfailing reliability, cruising the Norfolk rivers and broads until she was sold in 1953.  She was bought by Claude Hamilton – author of “Hamilton’s Navigation Guide to the Broads”.

To see a video of "Hathor" being hauled out click the link below.
http://youtu.be/EnPyTWkGnfA

This truly iconic vessel is scheduled to return to sailing condition in the spring of 2015. Follow her progress on facebook.
https://www.facebook.com/wherryyachtcharter

For more details of "Hathor's" intriguing history go to
http://www.wherryyachtcharter.org/hathor.php 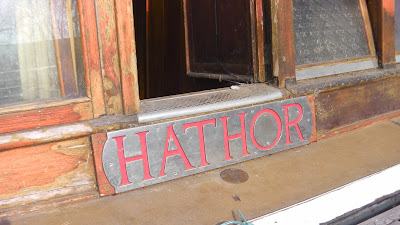