The North Walsham and Dilham Canal. Part One.

Eighteen months ago I knew very little about the North Walsham and Dilham canal.  It was merely by chance that I stumbled on the EAWA website and saw a notice asking the volunteers to meet at Briggate mill for one of their fortnightly work parties   I thought it would be a good idea take a camera along and see what was going on.  I expected to see a handful of people in wellington boots armed with shovels and forks.   What I did not expect to see were two excavators and a hydraulic tipping dumper, all of them on caterpillar tracks.  By the time I arrived, at about ten o'clock, every machine and volunteer was industriously beavering away.    The task for the day was to continue excavating the old Briggate mill pool, work which had been started many months before.   The chain saws whined as they cut through the fallen trees that blocked the channel where wherries had once moored.  The excavators removed the tree stumps and widened the channel. This was surgery of a serious kind.  It has to be said the area was very boggy and cut up quite badly,  it was this unedifying spectacle that had alarmed some local people.  Now twelve months on the scars have healed and the area is a picture of peace and tranquillity - a beautiful spot to just sit and relax.  The whole place is alive with wildlife, the star turn are undoubtedly the pair of Egrets who fish there regularly. 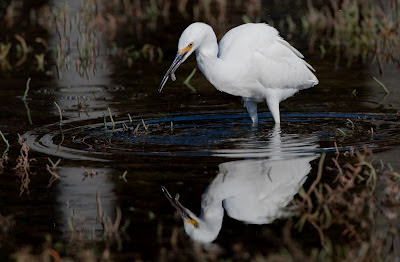 
Click the link below if you would like to see a video of the Egret fishing.
http://www.youtube.com/watch?v=3rrANidG0hQ&feature=plcp

Before 1810 the river Ant was only navigable as far as Dilham but on May 5th 1812 an act of parliament allowed the river to be canalised.   However work did not begin until 1825 and the canal was not formally opened until 29th August 1826.   The waterway was nine miles long from Dilham to Swaffield boasting six locks which raised the water level by some fifty eight feet.  Each lock was designed to allow wherries to pass through them providing their maximum dimensions did not exceed fifty feet in length, twelve feet six inches in  beam and a draught of no more than three feet when laden.      The water source for the canal came from the Antingham ponds but there was never quite enough and there was constant friction between the Mill owners and wherrymen who both felt their need of the available water was the greater..

Freight on the canal included  flour, grain and bone-meal being transported from the mills along the canal to the port of Great Yarmouth. Building materials, manure and marl were brought in the opposite direction.  Coal never became the lucrative cargo that the share-holders of the canal had hoped it would be.   Colliers continued to unload coal on the beaches at Happisburgh and Cromer and from there it was brought overland by horse drawn waggons denying the canal significant income.

Tolls for all freight carried on the North Walsham and Dilham were collected at Tonnage bridge.  The bridge  collapsed in 1980 but was replaced true to its original design in 1982 with the help of a grant from the Broads authority.

Attempts were made to improve trade on the canal with the introduction of pleasure boating.
Edward Press a miller at Bacton Wood, (who later bought the canal),  owned  five wherries he converted some of them  to pleasure wherries and operated them out of his yard at Ebridge.
It was the East Norfolk Railway that signalled the beginning of the decline in the canal's fortunes when the line from Norwich to North Walsham was opened in 1874.   As a direct result of  diminishing returns the section of canal from Swafield lock to Antingham was abandoned in 1893.  Buried in Swafield church  is the grave of  Jack Gedge skipper of the "Gleaner". His headstone is inscribed "the last wherryman", he died in 1989 aged one hundred, a gentle reminder of the halcyon days on the canal.

The canal has changed hands many times, one of the most notable was the purchase by Edward Press who paid £600 for the canal in 1886.  A lawyer named James Turner was appointed to pay off the shareholders but he decided to keep the money for himself and absconded with the funds.

The North Walsham and Dilham escaped the great flood of August 1912 with relatively little damage , unlike the Aylsham navigation which was totally wiped out as a navigable waterway.   For the NW&D the only notable flood damage was a major breach in the bank at Bacton Wood and part of the road was washed into the canal at Ebridge.   None of the flood damage was severe enough to halt trade on the canal although the breach at Bacton Wood was never repaired successfully as there were never sufficient funds due to falling revenue.

In 1921 Cubbitt and Walker bought the canal and formed the North Walsham canal company.
Trade continued on the North Walsham and Dilham - day books from 1923 show that six wherries hauled 2,300 tons of  grain and fertiliser.     By 1931 only one wherry was left trading on the canal, the "Ella", she completed 83 trips and moved 1,600 tons.  In 1934 "Ella" left Bacton Wood with a cargo of barley,  the very last load ever carried on the North Walsham and Dilham.
("Ella" was the last trading wherry to be constructed - built at Allens yard at Coltishall in 1912)


The North Walsham and Dilham has a colourful past but what of its future?  The aim is to restore as much of the canal as possible to a navigable waterway, progress has been spectacular in the short time I have been following the project.  The enthusiasm of the volunteers is truly astonishing, whether they are up to the waist in muddy water or working in reedbeds infested by stinging insects their progress is unstoppable.    I believe the old canal is destined to become a priceless example of reclaimed heritage which will be enjoyed by generations to come.

The EAWA are always pleased to welcome any folks who would like to be involved in this ambitious and exciting project.  For more details visit their website   http://eawa.co.uk/walsham.html

To see a video clip of progress on the NW&D http://youtu.be/Dji1tQdZ22w