Recently I spent the day with the Wherry Yacht Charter Charitable Trust in Wroxham.  I went there to film "Norada" being hauled onto the new slipway for some dry dock maintenance before she goes out on charter. The equipment to winch "Norada" onto the new slipway had been tested and trialed but this was the the first time it had been used for real.     The wherry yacht was winched out of the water just far enough to attach the A-frame and the air jacks.  Then slowly but surely "Norada" was inched majestically up the slipway - fascinating!

I have a limited knowledge of boats and their design so it was curiosity that drove me to research "Norada's" pedigree.

There is a theory that the elegant lines of the old trading wherries can be traced back to the Viking long ships.  True or not, there is no doubt that the graceful profile of a trading wherry is very pleasing to the eye.    When freight shifted from the river to the railway many trading wherries were converted to pleasure wherries.  Then, as tourism on the broads grew in popularity, purpose built pleasure wherries were turned out of the yards to meet the growing demand.   The ultimate development of the pleasure wherries led to the  emergence of the lighter and faster Wherry yachts.   "Luxury afloat" was unashamedly built into these hire craft and the Edwardians loved them.

"Norada" is one of three wherry yachts currently operated by the WYCCT,  her sisters are "Olive" and "White Moth".   All three of these vessels were built by Ernest Collins of Wroxham.    The origin of these elegant craft is a fascinating story in its own right.

In late summer 1903, the beach yawl "New Skylark" was carrying thirteen passengers on a pleasure trip from the beach at Great Yarmouth.   About a mile out she collided with the F E Webb, a steamer out of London.  The "New Skylark" was practically cut in half and sank instantly with the loss of six souls.

Almost a week after the accident the wreckage of the "New Skylark" was recovered and towed into Yarmouth harbour.  Ernest Collins learned of the "New Skylark" and bought the wreck.   He redesigned her with cabin accommodation for ten adults and added a counter stern.  With a gaff and boom rig she was  re-launched as the wherry yacht  “White Heather”.   "White Heather" could be hired for around ten pounds per week including a skipper and an attendant, she continued working as a hire craft until 1932.

In 1909 Ernest Collins built "Olive" a dedicated wherry yacht naming the vessel after his youngest daughter.  The interior layout used in "White Heather" had been so successful it was replicated in "Olive".    "Olive" weighed in at twenty one tons with a draught of three feet six inches.   She could only squeeze under Potter Heigham bridge if tidal conditions were perfect, and passing under the old Ludham bridge was out of the question.

Next came "Norada" she was named after the nineteen metre class, racing yacht of the same era.  "Norada"  was launched in 1912, the same year as "Titanic".  However the the wherry yacht proved to be infinitely more durable than the ill fated liner.    "Norada" weighing just sixteen tons was shorter than "Olive" by three feet, and twenty one inches narrower in the beam.   She was designed specifically to pass under the "Old" Ludham bridge by virtue of a lower cabin than her sister "Olive"   "Norada's" reduced dimensions would also allow her to sail freely and unhindered through the locks on the Upper Bure and the Ant.  Ironically many of the locks and bridges were washed away in the great flood the same year she was launched.

"Norada" continued working as a hire craft until 1950 when necessary economies to the Collins hire fleet led to her being sold into private ownership, her new owner renamed her "Lady Edith".   Then in 1964 Barney Matthews, once a skipper for Ernest Collins, bought and restored the wherry yacht.  In her seventy-fifth year she was once again named  "Norada".

2012 is "Norada's" centenary year - watch out for this spirit of the Edwardian age sailing on the Norfolk and Suffolk waterways this summer.

A great deal of time and money has been allocated to protecting the Broads and Broadland from flooding. One hundred and forty million pounds over twenty years to be precise. This is the Broadland flood Alleviation Project which has just reached its midway point.   Mile after mile of new dykes and banks now follow the course of the waterways - their presence may not please everyone but in the event of excessively heavy rainfall or tidal surges villages and waterside properties now have added protection.

Recently we had the cameras out at Happisburgh on the Norfolk coast - we went to see the properties about to be demolished in Beach road.   The erosion of the cliffs along this stretch of the coast has been going on for hundreds of years and the "Powers that be" plan to allow it to continue for at least the next one hundred.

What, you may ask, has this got to do with the Broads?
The flood protection plans currently being carried out in Broadland involve a large number of agencies, but none of them are responsible for Shoreline Management.


There is a Shoreline Management Plan and when it is boiled down it amounts to an orderly retreat from the sea.  As far  as the elements are concerned we are not going to fight them on the beaches.    The architects of the plan have forecast  the degree of cliff erosion  up to 2025, 2055, and 2105.  Nobody can be sure if the experts have got their forecasts right, we just have to trust in "The Great God Computer" and hope they have.   The slipway for the Happisburgh lifeboat slipped away sometime ago and the Lifeboat station itself has been demolished.   The lifeboat station was not due to fall into the sea for another twelve years.   Similarly, the catwalk leading to the beach stairway has been removed from the crumbling cliff, seemingly in the nick of time, its demise also appears to have crept well ahead of schedule.

Talking to local people only provides anecdotal evidence but it does graphically illustrate what is happening to parts of the Norfolk coastline. Like the fellow who told me he remembered having tea in his friends garden when he was he was a teenager - he is now well into his sixties and the garden now lies more than a  hundred yards out to sea.

The timber sea defences at Happisburgh were constructed in 1959 between Ostend and Cart Gap.  By 1989 the sea had rendered sections of them in-effective and since then the erosion of the cliffs at Happisburgh have accelerated at an alarming rate.    Local government has been fighting a losing battle to maintain the depleted sea defences with limited resources  and without any financial help from Central Government.
Local government agencies simply cannot raise the funds required to finance a civil engineering project of this magnitude, while Central government feel it is economically unsound to spend large sums of tax payers money to protect a few clifftop properties in a remote Norfolk village.   The rate of erosion is being monitored  in case the heart of the village becomes threatened.  When that time comes it may well be too late. 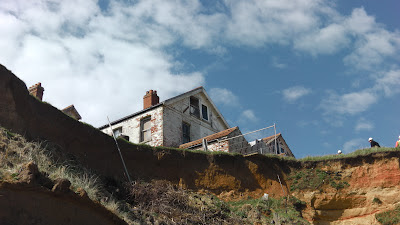 In the 1990's there was a feasibility study carried out to stabilise the cliffs and funds could have been made available for the scheme.  Unfortunately the various agencies procrastinated for such a long time that the window of opportunity to launch the scheme was lost along with more large areas of Happisburgh cliff.  The lack of decisive action for whatever reason means we no longer have a defence against the sea on this vulnerable stretch of coast.

Now for the scary part.  The moorings at Stalham are only five short miles from those disappearing cliffs at Happisburgh.  The landscape between the cliffs at Happisburgh and Stalham is flat rolling farmland.    Unless something is done, it is not a case of if the sea breaks through, but when.   In this event there will be absolutely nothing to stop the sea reaching the Broads.

It will not be in my lifetime but unless some action is taken it could happen in less than a hundred years.  To someone in their twenties that must seem an inconceivable time scale, although in reality it is barely a lifetime away.   This subject has been aired in many forums over a number of years.  To some enlightened individuals it is dismissed as scare-mongering. To other, equally, well informed people it is just a theory and it may never happen.   The view of this old "Norfolk boy" is somewhere between these two extremes.   Rising sea levels and increased rainfall in the 14th century were responsible for flooding the peat excavations and creating the Broads - what bitter irony it would be if it is the sea that destroys them. 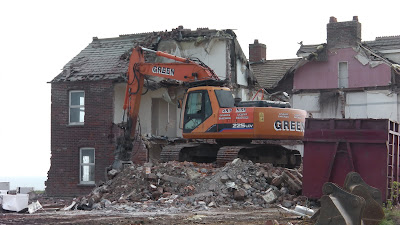 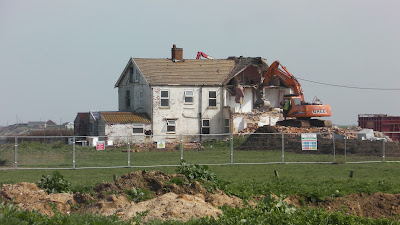 Author's note.
There is no political agenda attached to the above article.  I only observe what heritage is preserved and that which is at risk.   "There is nothing more powerful than the power of nature".


To see a clip of the demolition at Happisburgh click here