A common sight for travellers in Norfolk and Suffolk are the old drainage mills.  Travel by road, rail or river and there is usually one of these relics somewhere on the horizon.   The location of the mills out on the windswept marshes are yet another reminder of East Anglia’s forgotten past.
In the mid 1800s there were 240 drainage mills working in Norfolk, today about 70 remain.  The majority of them have fallen into disrepair and are now unloved and unwanted. 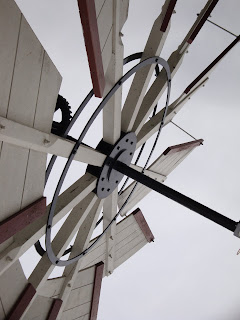 Beside the river Yare, (or the Norwich river as it was called by the old wherrymen), stands Hardley mill.
The mill was built in 1874 for Sir Thomas Proctor Beauchamp of Langley Hall.   The mill was in operation until the 1950's when it was "tail winded" and extensively damaged.    The Internal Drainage Board abandoned Hardley mill and replaced it with an electric drainage pump.  Hardley mill became another unwanted,  redundant wind pump.
We took the cameras there last Autumn to shoot some film - as we approached the mill we could see the sails rotating majestically in a fairly light breeze.  There is something very "Norfolk" about a windmill.  A sentinel working in splendid isolation out on the marsh.   A symbol of reliability that belongs to another age,  not polluting earth or atmosphere, a machine in perfect harmony with nature.
Without the drainage mills thousands of acres of valuable grazing land would have been permanently under water.  Low lying Marshland pastures were drained by a network of dykes which carried the water  to the mills which returned the water to the river.
Early drainage mills pumped the water by scoop wheel until these were replaced by turbines.  The turbines could lift around twelve tons of water per minute. 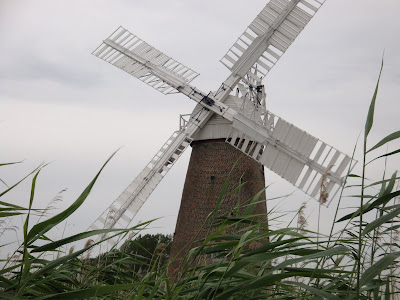 Hardley mill has undergone an incredible transformation  -  The ultimate plan is to restore Hardley mill to full working order when it will once again pump water.   We were invited to take our cameras to the very top of the mill and sample the wonderful view.  The climb was a challenge even with just the minimum of equipment.   The lower floors were relatively easy, but where the tower narrowed on the third and fourth floors it became more of a squeeze.  Finally we emerged on the platform of the mill cap by way of an iron ladder which rotates as the cap turns with the wind.   The view was spectacular from every quarter - the marsh rolling out beneath us with the Yare, a glittering silver ribbon, winding through it.
The giant sails rotating ponderously through their arc, their creaking timbers bringing the mill to life as the power resonated throughout the tower. 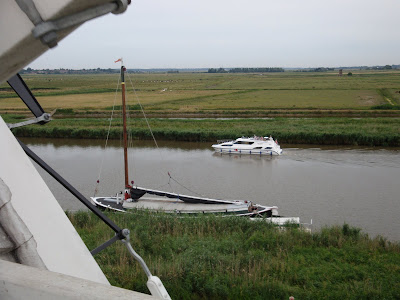 Although the the drainage mills were primarily used to drain marshland they did have other uses.   Wherry skippers found the mills useful to hide contraband making it's way along the rivers.  There was more profit in a single cask of French Brandy than forty tons of coal.   Mill men would warn the wherries if the Excise men were in the area by stopping the sails in the cross of St George or the cross of St Andrew.  One signalled danger and one signalled all clear.  The message could be passed across the flat Norfolk landscape faster than any horse and rider.
A short video can be viewed on the link below.
http://www.youtube.com/watch?v=ovE7zWvumbs
or click on "My favourite links" on the right of the blog.
Thanks for looking
Jonno